Over the years we have looked at the various anniversary shows held at Maple Leaf Gardens, this time we focus on the final one, celebrating 50 years of wrestling at MLG. 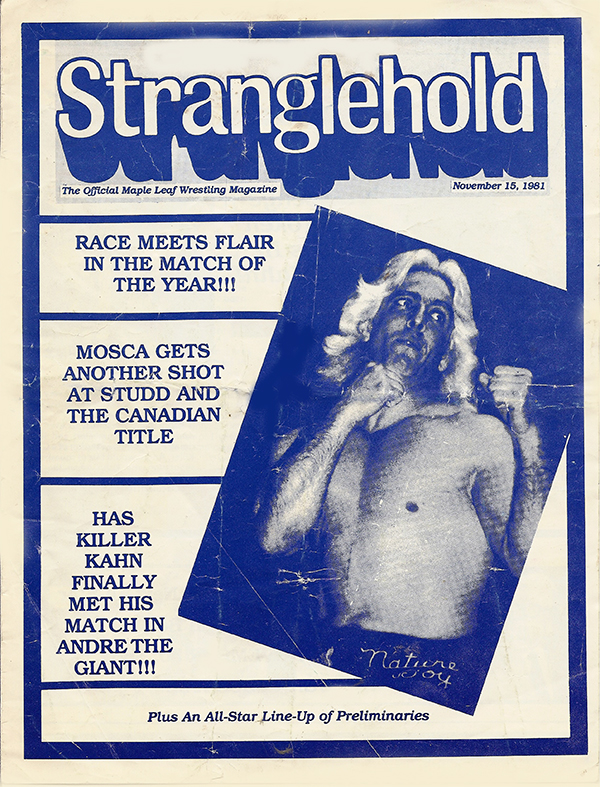 The first card in the Gardens was held on Nov 19 1931 under the promotion of the Queensbury Athletic Club headed by Jack Corcoran. Corcoran passed the promotion to John & Frank Tunney in 1939 and when John passed away suddenly in 1940 Frank took over the reigns.
By 1981 the promotion was celebrating 50 years at the Gardens.

The card was set for Sunday Nov 15 and featured an NWA title bout with new champ Ric Flair defending against #1 contender Harley Race. At that time newspaper coverage was minimal as compared to previous eras, but this anniversary earned some notable entries in the dailies.

The Toronto Sun had an enlarged ad type entry on Nov 11 with the caption 'He does it with Flair' with a photo of the new champ and his belt. It was billed as 3 championship bouts, Alongside Flair vs Race, Angelo Mosca was trying to regain his Canadian Heavyweight Title from John Studd, and NWA TV champ Ron Bass defended against Kurt Von Hess. Added to that was Andre the Giant going for revenge against Killer Kahn for breaking his leg (actually happened well before and the two had had several return bouts elsewhere) and 'others' including Johnny Weaver, Mike Miller, Mike (billed as Ron) Davis, and Victor Jovica. 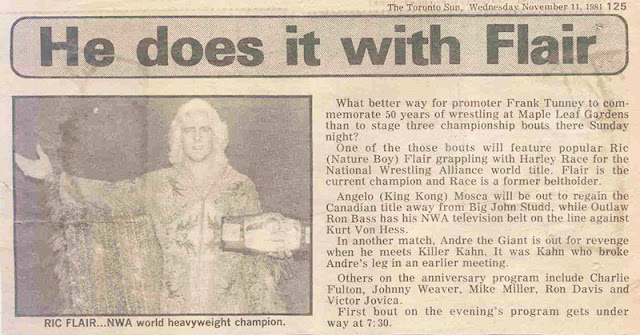 The Globe had a feature article by James Christie (40 years at Globe as Sportswriter) entitled 'Love and pain and 50 years of grappling.'  He looked at the history of wrestling here and quoted Tunney as saying he 'would sell out' the card expecting 17,000 and a gate of $100k.

The card did almost sell out MLG, announced attendance was 16,000 which made it one of the best of the era. Since 1974 there had only been two other cards over 15,000.

The place was full, and loud.

The card itself did not disappoint, though there were some minor changes from what was scheduled.

The highlight was Flair vs Race. 24 minutes of suplexes, figure fours, falling headbutts, and all out action, both in the ring and on the ramp. As was usually the case when these two met, both were covered in blood after sacrificing themselves on the hard wooden ramp.

Race appeared to pin the champ when ref Terry Yorkston counted Flair down for 3 and the fans thought we had seen another title change in Toronto. Ref John Laing came out to tell Yorkston that Race had pulled Flair's trunks. During this exchange Flair got behind Race and threw him into the ropes catching him in a cradle and pinning him. Flair was declared the winner and some of nights wrestlers came out from the back to congratulate him.

Race though, blew his stack and laid out Mike Davis before piledriving Flair into the mat. Race continued to stomp on Flair until Johnny Weaver grabbed the NWA title belt and chased Race out as the fans cheered.

That was their 2nd of 6 bouts here over the NWA Title between 1980-1984, each as champ for 3 bouts. Flair who was popular here since his switch in 1980 always earned the cheers, while mostly a heel in other areas. Even as a full fledged heel here in 78-79 the fans loved him. When he made his return as NWA champ we saw 10 defenses total 1981-1984. The only downside of his NWA runs was that we saw him less often. 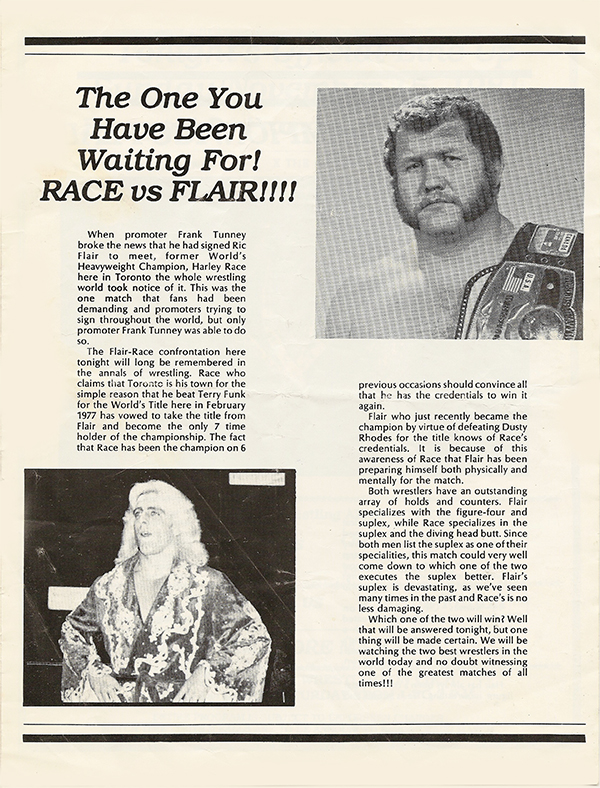 The Andre- Kahn bout was also a hard fought, very realistic and rough battle. Andre looked to be killing Kahn before Miller, Fulton, Slapowitz, and Vines rushed out and dragged Kahn away from the angry Giant. Andre had Kahn on the ropes trying to break his leg and wouldn't let up so was officially a double dq.

Mosca and Studd continued their feud with two referees and brawled their way to the floor where Studd had enough and fled to the dressing room. It left Mosca the winner but not the champ. Mosca eventually regained the title a few months later in a cage bout.

Those 3 bouts alone were worthy of the card and the openers were pretty good, including the only appearance for Slapowitz. Some of the wrestlers appeared in Brantford for TV tapings the following day, notably Race who wrestled 3 bouts for the day.

The card got some write ups in the magazines of the day including an 'Arena Report' in PWI, 'The Wrestler' had a story entitled 'The John Studd School of Rulebreaking' - Studd mentoring Slapowitz, Miller, Davis and a great shot of the old dirty Maple Leaf Dressing room, and a 2 page spread in 'Ring' Magazine.

None of the bouts from the 50th card have surfaced, I have a hazy memory of seeing portions of the Andre-Kahn and Flair-Race bouts on the CITY TV News.
Some other of my Flair-Race pics are at Flair vs Race: Photos
-AC & photos by... 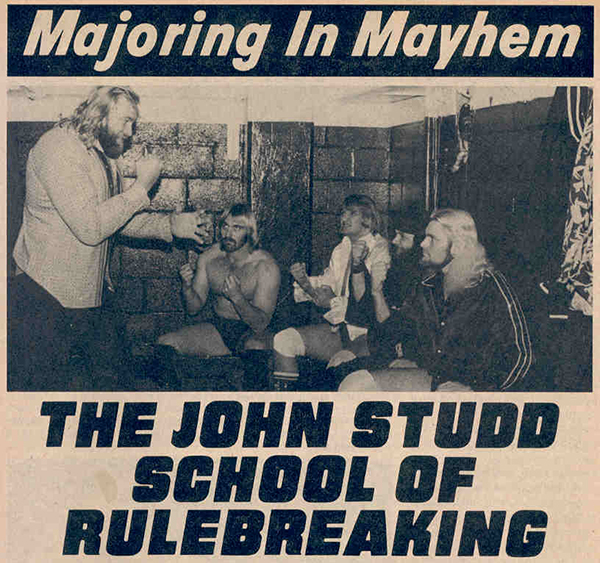