Ivan Mickailoff: "The man who made wrestling in Toronto": Gary Will's TWH

Frank Tunney is remembered -- and rightly so -- as Toronto's greatest wrestling promoter, but the man who established Toronto as a wrestling city and paved the way for Tunney has been largely forgotten.

There was a lot of skepticism when Ivan Mickailoff announced in 1929 that he would be running weekly shows at Arena Gardens. While top-name pro wrestlers had made occasional stops in Toronto -- and there was even an effort made to stage the Gotch-Hackenschmidt rematch in the city (more about that another time), no one had ever run regularly-scheduled shows with top wrestling stars. "Wrestling has never been a popular sport in the Queen City," wrote the Globe (see separate story on the first show for the clipping).

Mickailoff -- called "Mike" in Toronto -- was a former wrestler who claimed to have been born in Siberia and spoke English with a thick accent. Many of the biographical details I've come across are suspect. He was said to have been an Olympic champion in 1908, which is false. He was also said to have worked as some kind of secret agent in WWI and to have served in the Russian Imperial Guard for nearly four years, attaining the rank of colonel. He was a tall man who ejoyed cigars and reportedly liked playing card games, particularly pinochle and hearts.

His name occasionally comes up in match results from the 1910s. For example, he opened the 1915 wrestling season in Montreal losing to John (Giovanni) Perelli on November 5 ("there was little excitement," said a report in the Toronto Star). Just over a year later, on November 27, 1916, Mickailoff lost in straight falls to Dr. B.F. Roller in Springfield, Mass.

I don't have any details for the years before he launched his Toronto shows -- he later claimed to have promoted wrestling in Miami -- but somewhere along the line he hooked up with Boston promoter Paul Bowser, who was one of the dominant forces behind pro wrestling at the time. He apparently also had some ties initially to Toots Mondt, who wrestled on four of Mickailoff's first five shows. Mondt would later be allied with Mickailoff's opposition in Toronto and would even own a piece of Jack Corcoran's office.

After a slow start, Mickailoff's shows grew from attracting hundreds to drawing thousands, leading to an appearance in October of Bowser's world champion, Gus Sonnenberg.

"Taking loss after loss without a murmur, he built the game up within a short space of time." -- GLOBE, October 31, 1929
"By staging bouts that were highly satisfactory, matchmaker Michailoff gained a large following for wrestling here." -- GLOBE, January 17, 1930

"When Ivan Mickailoff commenced promoting wrestling shows in Toronto the attendance figures were around the 200 mark. He has built the game to the stage where it is now numbered among Toronto's major sports." -- GLOBE, May 30, 1930

"He came to Toronto a year ago last spring, and astounded an amazed public when he announced that he would stage wrestling shows at Arena Gardens. Old-timers smiled. They had seen this venture tried before, and didn't think that Mickailoff would make headway. It did require considerable time to convince Toronto that here was a sport worth while supporting, and there were lean days, but Mickailoff and his associates shouldered their losses, and refused to be dismayed. The money eventually began to roll in, and now others would emulate Mickailoff." -- GLOBE, October 20, 1930 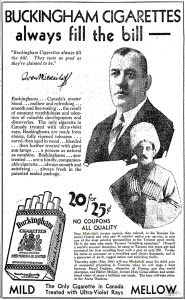 Mickailoff was soon popular enough to be used as a spokesman for Buckingham Cigarettes from Philip Morris & Co. Ltd. (see ad at right). The ad used a photo of what was said to be Mickailoff in his Russian Guard uniform.

After having the city to himself for a year-and-a-half, Mickailoff faced his first competiton when Jack Corcoran and his Queensbury Athletic Club were granted a wrestling license in 1930. They held their first show in November and it was a colossal flop, but Corcoran quickly learned the tricks of the trade and rebounded strongly. After about a year, Corcoran had taken over as the top promoter in town, and that position was cemented when he arranged to be the matchmaker for shows at the new Maple Leaf Gardens, which opened in November 1931.

After competing head-to-head with Corcoran for two years, Mickailoff was put out of business by the Ontario Athletic Commission, which decided not to renew his wrestling promoters license when it lapsed at the end of October 1932. Commission secretary James Fitzgerald told the Star that the decision was made "for the good of the sport." Instead, it granted a license to the Shamrock Athletic Club, which had previously promoted boxing.

Mickailoff immediately made plans to relocate to Winnipeg and booked what was billed as his farewell show for October 26, 1932. It was to feature Bowser's world champion, Henri Deglane defending his title against Bibber McCoy, another of Bowser's boys. The show drew 9,000 fans, but neither of the wrestlers booked in the main event appeared that night.

Deglane claimed that Bowser never told him that the show was on a Wednesday and not Thursday as was the custom in Toronto. McCoy was sent on his way to Toronto at a time that guaranteed that he wouldn't be able to make it for the official weigh-in, and he ended up not getting to town until the show had already started.

There was speculation at the time that Bowser -- for whatever reason -- had deliberately sabotaged Mickailoff's final show.

Mickailoff followed through on his plans to go west and in 1933 promoted shows in Winnipeg, Calgary, Regina, and probably other towns. He wasn't very successful. Mickailoff was said to have lived in the Ivan Apartments on River Ave. in Winnipeg where he shared his apartment with wrestlers who would drive in for shows.

Mickailoff was again turned down for a licence by the Ontario Athletic Commission in 1933, but the following year he reappeared in Toronto as the matchmaker for the Metropolitan Racing Association -- the horse racing people -- which decided that its federal charter enabled it to run wrestling shows without a license from the province (a long story, and one that had significant repercussions, that will have to wait for another time).

The MRA quickly found out that pro wrestling was a dirty business. Unable to book the wrestlers they wanted, they made their first show a free event at the Exhibition Coliseum on December 13, 1934. It drew a reported 10,000 people (see ad at right -- featuring a photo of Mickailoff), but it was the only show they ran. The president of the MRA later said that he learned through this experience not to mess around in other people's areas of business.

Mickailoff did make a comeback in 1935 as the matchmaker for the Arena Athletic Club -- one of three groups awarded a license that year, and the only one that didn't operate out of Maple Leaf Gardens. They ran their first show at the Mutual Street Arena on November 22 with names that were well below the standards being delivered at the Gardens.

It was pretty slow going for Mickailoff until May when he booked the Toronto debut of world title claimant Ali Baba, which drew an impressive 5,000 fans. A similar crowd came to see Baba's next match in June, and Mickailoff was suddenly outdrawing Corcoran's Gardens shows. A main event in October between Baba and new world champion Everett Marshall drew 5,100 to the Mutual Street Arena. It was right around that time that Mickailoff learned that his license was again being threatened.

According to figures provided by Corcoran, the gate receipts from pro wrestling through the 1935-36 season were almost half of that from the previous year: $75,374 vs $144,585. The number of shows declined from 42 to 29 (there were actually more than that, but these are the numbers he provided). He blamed that outcome on the existence of three wrestling promoters in the city.

The OAC decided to renew all three licenses in 1936, but Corcoran threatened to appeal the decision to Ontario premier Mitch Hepburn. Hepburn said he had no interest in hearing an appeal, and Corcoran dropped his complaint. Mickailoff told the Star that the wrestling interests controlled in the U.S. were putting on the pressure to try to force him out of business.

He remembered the times years earlier when he had helped Corcoran. "I telephoned Boston for permission to let the men work for Corcoran. Now he doesn't want me to have a license."

The 1936-37 season got off to a very slow start, and in December, Mickailoff and Corcoran both only attracted 1,300 fans for their shows. 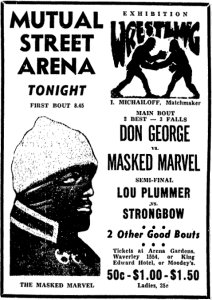 Corcoran bounced back to become the clear winner in the promotional battles in 1937, but Mickailoff would occasionally draw some stong gates himself, including a reported 8,000 who turned up to see the Masked Marvel take on Strangler Wagner in March 1938, with 6,500 returning to see Marvel wrestle Lou Plummer in April and 6,000 on hand for Marvel against Ed Don George on May 12 (see ad at right).

But that would turn out to be Mickailoff's last show in Toronto. He received a license to operate in 1938, but decided not to run any more shows and asked for the return of his $5,000 license fee from the OAC.

"I'm sorry to see Mike go," said Corcoran to the Globe. "I like competition. While he and I had our differences some years ago I have found him quite ready to cooperate during the past two years."

He was reported to be moving to Florida, but almost ten years later, there was a report in the Globe that Mickailoff was promoting shows in Providence, Rhode Island.