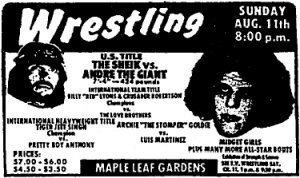 When the Sheik returned to Toronto in 1969 after a four-year absence, he quickly established himself as a main event performer (after one undercard appearance) and began a hot period for Toronto wrestling of a kind it had never seen before and wouldn't see again until the rise of Hulkamania.

By my count, Sheik's record through his streak going into that match was 100-0-27. That's 127 singles matches without a loss. That includes 14 matches against Lord Athol Layton and 10 against Bobo Brazil.