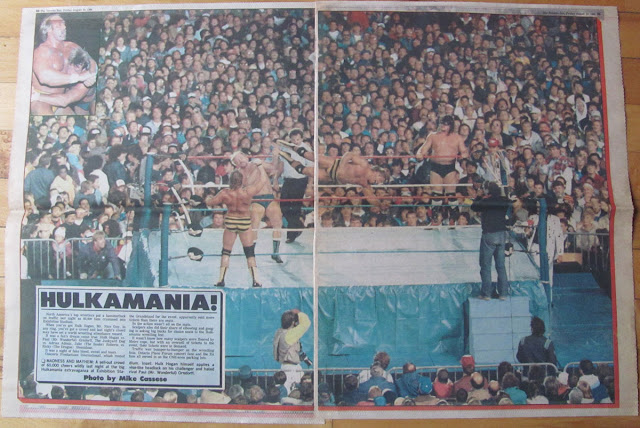 It re-wrote the record books in what became known as The Big Event, the WWF Exhibition Stadium card on Aug 28 1986. Originally announced as part of that summer's Grandstand Series during the annual CNE activities, the show would thrust Toronto into the world's wrestling spotlight once again.
HULK HOGAN/SPANKY SPANGLER SPECTACULARS SET FOR CNE
A world-title wrestling bout featuring World Wrestling Federation champion Hulk Hogan and truck-and-motorcycle daredevil spectacular. starring Spanky Spangler, Danny "Fireball" Reed and Robbie Knievel will fill the remaining two dates of this summer's CNE's grandstand lineup. The concert season also includes comedian Bill Cosby, and rock stars Van Halen, Elton John, Psychedelic Furs, Stevie Nicks and Whitney Houston (*also Genesis, AC/DC, Judas Priest). The Aug. 28 Hulkamania show pits Hogan against an un-named opponent for the world title. Tickets will go on sale soon.
Jul 15 1986 Star
By this time Toronto was deep into it's Hulkamania era. It was only a few years removed from Flair soaking in the fans cheers on the ramp, or Jimmy Valiant (the Mid-Atlantic era's Hogan) raising the roof as he hit the ring. As many of the old-time fans started to move away there were thousands of new ones. Kids were now a big part of the equation and were filling up MLG along with their parents and family. 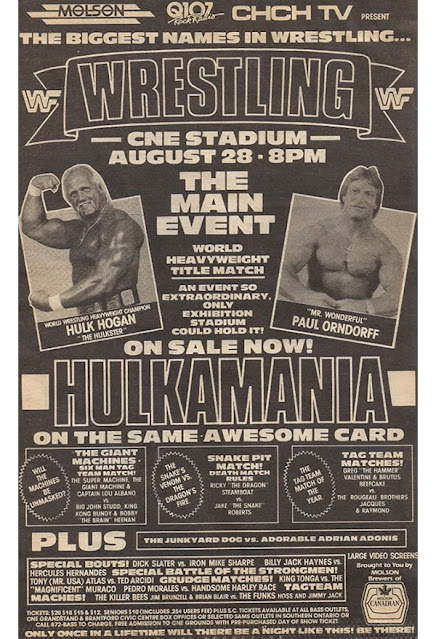 TICKETS WILL COST YOU AN ARM AND LEG
You want Ticket Traumas!! I'll give you traumas!! Thursday's Hulkamania show al Exhibition Stadium is gonna be the bloodiest, baddest, bone-crunchingest and BIGGEST wrestling event in North American history. Bigger than Van Halen. Bigger than ,Judas Priest. Bigger than Elton John, The BIGGEST event in this year's CNW Grandstand series!! Don't take my word for it. The World Wrestling Federation says this show will make the record books. Already 42,000 tickets have been sold. They're going for 65,000. Toronto's a wrestling town. WWF president Jack Tunney lives here. He's been running successful matches in Maple Leaf Gardens since 1956. (*Not sure how they came up with that number, Jack in the office as early as 1951-52 and took over officially in 1983)
Aug 20 1986 Star
The papers too were now filled with stories on Hogan, the Rougeaus, Randy Savage, and the rest of the WWF cast. In the M-A era we were lucky to get the ad and the results and an occasional article. Now they were devoting multi page spreads in the dailies  and crossing over into the Entertainment sections. Even the Star entertainment guy Peter Goddard got on the bandwagon, kicking off his day-after column with 'I don't take wrestling seriously' no less. An article at the beginning of the year had CHCH (home of the local wrestling TV show) VP Gary Buss proclaiming 'I've never seen anything like it! Maybe five years ago you'd use wrestling as a throw-in. A client would say 'Oh, God, don't give me that unless it's free.' Now you look at it as a legitimate package. It's show-business.'
The last time Jack had ran Exhibition Stadium it was the summer of 1983 and wrestling was in a downturn again. They were a huge success at the time. Cards 2 weeks apart and anywhere from 30-45,000 people total depending on source. The Night of Champions, and Return of Champions were the biggest cards (as far as bouts/titles) ever held here to that time. If the first one actually had 19,000 or more it would have been the record for the city to that point. The Gardens was packed to the rafters at a bit over 18,000.
We looked at the '83 Exhibition Stadium cards as part of a broader look at  Open Air Wrestling in Toronto
Fast forward 3 years and the stage was set again. This time at the height of wrestling's popularity in the city in recent years. Jack staged it as a partnership with CPI and the Ex and to say it was a huge success is a massive understatement. When all was said and done attendance was variously reported from 61-71,000 fans. A souvenir seller said business was better than at rock concerts. Available: 12$ Hulk t-shirts, 6$ posters, 3$ programs, and buttons, cups, and the rest of the WWF merchandise machine. Seats were 20$ for ringside down to 8$ for 'seats close to Mississauga.'
RECORD 65,000 HOLLER FOR HULK
You had to be there. History was made in Metro last night, a large hammerlock on the sweatier chapter of our  book of records, hundreds of blows for mankind against the forces of evil and; most important, a welcome black mark (nearly $100,000) on the profit ledger of the Canadian National Exhibition. Forget rock concerts, country singers, killer trucks or the midway if you're talking rebirth of the Ex. Last night It was wrestling. Wrestling with a capital W. It was the Hulkster, Adrian Adonis, the Killer Bees and that damn Jake The Snake Roberts, everyone you've cheered or cursed on all those endless TV matches. Before it was over, 65,000, the largest crowd in the history of the sport (er, entertainment, er, exhibition) travelled, fought and bought their way into a chilly Exhibition Place to set a world attendance record for a single card and a near record for the largest grandstand show in the history of the creaky old Ex.
Aug 29 1986 Star 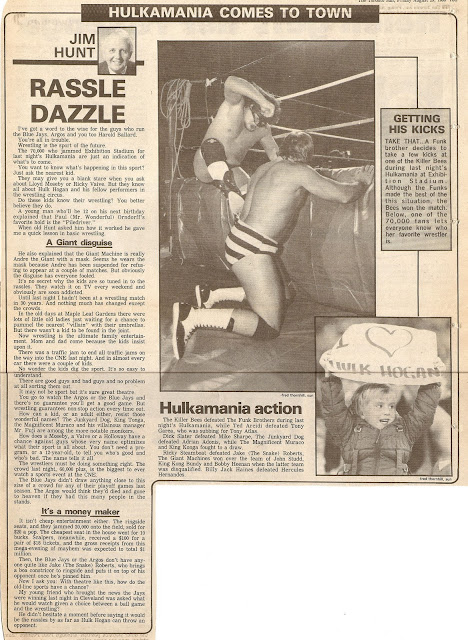 Bill Stockwell, GM of the Ex said 'There's been bigger crowds here but nothing like this. This is unique.' The Ex was in a bit of a decline in attendance that year, but all was forgotten that night. 'They say there's nothing new at the Ex and I say to them, let them beat this one.' Profit was based on ticket sales, said to be a minimum $75-100k plus a large peripheral gain including parking and concessions.
It added that Stockwell had come up with the idea two years before, when visiting the Texas State Fair. 'Put it together I said, and this result is tonight.'
The Globe mentioned that 'The Toronto crowd, described by the promoters as a world record size for watching a professional wrestling match, surpassed a crowd of 52,000 in 1980 at Shea Stadium in New York.' Shea had held the acknowledged 'pro wrestling' record to that point but was in actuality considerably less than others worldwide. The Big Event held the title for just a year, until Wrestlemania III shattered it, with 93,000 proclaimed. The Globe also added that Ricky Steamboat had said that although wrestlers lose a great deal of money with the exchange rate when they wrestle in Canada, 'Toronto is my second home.' Steamboat a big favorite here in the M-A era.
We later broke our own record with 67,000+ at the Skydome in 1990 for Wrestlemania VI, and then again in the early 2000's. That's a lot of wrestling fans! 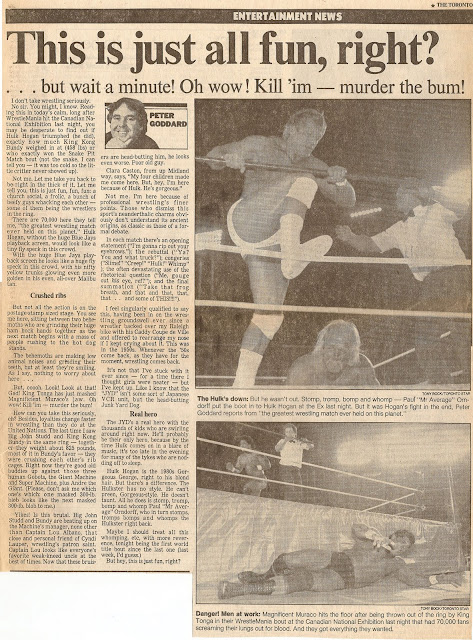 It wasn't all happy Hulkamaniacs though, a ticket snafu left some fans fuming.

ANGRY FANS PROMISED REFUNDS AFTER TICKETS PRINTED IN ERROR
Concert Productions International says it will refund money to the hundreds of wrestling fans who were involved in last night's ticket mixup. Many wrestling fanatics showed up at Exhibition Stadium to find their choice floor seats didn't exist. Others couldn't see the ring be­ cause the seat less people were told to huddle in aisles. CPI spokesman Barbara Hoffman said late last night tickets were printed by mistake after a worker didn't consult the seating plan carefully. She said she didn't know exactly how many wrong tickets were sold. 'But people involved in the problem will be given a full refund,' she said. Details on how to collect refunds will be announced once CPI decides which tickets are eligible for rebate, she said. Paul Bernard, 16, paid $21.40 for his floor seat and came from Mississauga to see the Hulkster. He waited "several hours" to get seventh-row ringside seats  when tickets went on sale a month ago, he said. "What a joke," Bernard said. "They tell me I'm part of wrestling history. I tell you I got no seat and I gave up a night for this when I could have been at the cottage." He left after only three matches because he couldn't see kneeling in an aisle.
Aug 29 Star 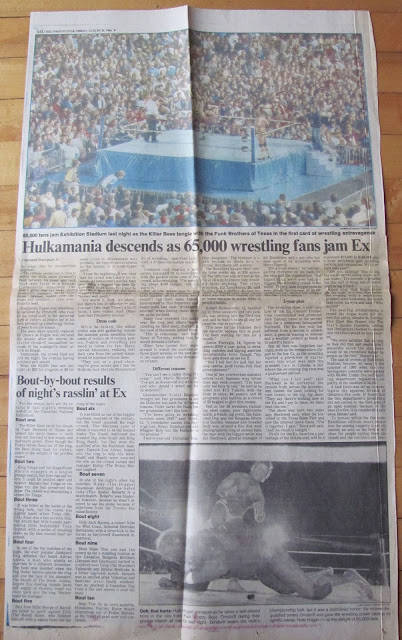 The Toronto Fire department was also on hand to make sure it met fire safety standards. It did. The Stadium had come under scrutiny the summer before when Bruce Springsteen packed 69,000 in - twice. Under the regulations, capacity was only 54,331. After some investigation they decided that the jurisdiction did not extend to the field area of an open stadium because in the case of a fire it is considered a safe area.
They were already speaking about doing it again the following year. Stockwell:  'Are you kidding? This is big big bucks we're talking about, serious money. The demand is growing for this sort of thing and of course we'll bring it back.' 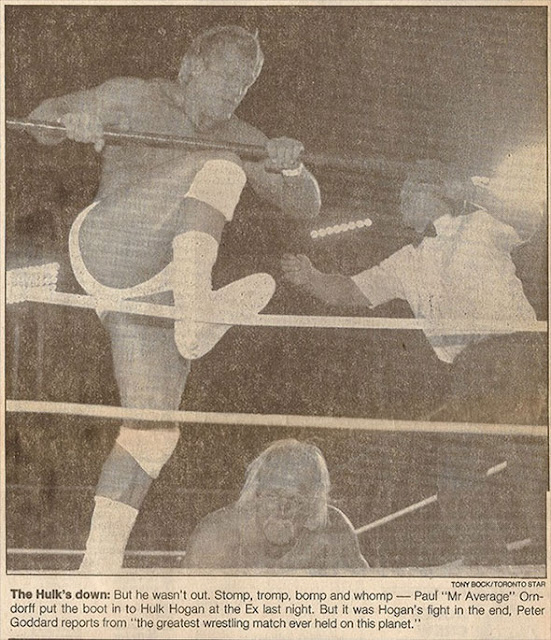 HERE ARE RESULTS OF LAST NIGHT'S BOUTS
For the record, here are the results of last night's wrestling match at the Canadian National Exhibition:
...Orndorff wears the Hulk's championship belt, but it was a short lived honor: the referee disqualified Orndorff and gave the wrestling crown back to the rightful owner, Hulk Hogan.
Bout one
The Killer Bees faced the dreaded Funk Brothers of Texas and looked like early losers - until they left the ring to don masks and newfound power. Even though the Funks threw them out of the  ring, the Bees stung back for victory, much to the delight of the pro-Bee crowd.
Bout two
King Tonga and the Magnificent Muraco engaged in a singles grudge match, but time ran out be fore it could be decided once and forever. Muraco had Tonga on the ropes but the bell preserved the draw. The crowd was demanding a crown for Tonga.
Bout three
It was billed as the battle of the strong men, but the crowd was slightly upset when Tony (Mr. USA) Atlas was a late scratch. Still, Ted Arcidi had little trouble hammering fill-in bodybuilder Tony Gramm with a series of crushing blows as the fans roared their approval.
Bout four
In one of the big matches of the night, the ever popular Junkyard Dog defeated the hated Adrian Adonis, a man who admits he marches to a different drummer. The bout was decided when the Dog threw Adonis outside the ring and into the face of his manager, The Mouth of The South. Adonis, despite his flowing blonde locks and supply of flowers, could not climb back into the ring. Neither could his manager.
Bout five
Evil Iron Mike Sharpe of Hamilton failed to spark against Dick (The Rebel) Slater, who. finished him off with a suplex from the upper rung of the ropes.
Bout six
It was billed as one of the biggest. tag-team matches of the century but  the  result  appalled the  huge crowd. The Machines (one of whom is rumored to be the banned Andre The Giant) destroyed the dreaded Big John Studd and King Kong Bundy, but they were disqualified after the Machines manager, Captain Lou Albino, leaped into the ring to help his team. Studd and Bundy were awarded the win as the crowd cursed and manager Bobby (The-Brain) Heenan laughed.
Bout seven
In  one  of  the  night's  other big matches, Ricky (The Dragon) Steamboat  destroyed  the  hated Jake (The Snake) Roberts in a death-match. Roberts was hindered, however, because he wasn't allowed to use his snake because of objections from  the  Toronto Humane Society.
Bout eight
Bllly Jack Haines, a comer from, the West Coast, defeated Hercules Hernandez with a drop-kick to the throat as the crowd thundered it's approval.
Bout nine
This one had the crowd up for a standing ovation as the Canadian Rougeau Brothers (Jacques and Raymond) battled to a victory over Greg (The Hammer) Valentine and Brutus Beefcake in a bitter tag-team match. Jacques was so excited after Valentine an Beefcake were finally subdued that he  plucked  a  Canadian flag from a fan and waved it over his head.
Bout ten
To no one's surprise Handsome Harley Race made mincemeat out of Pedro Morales as the trend of good over evil continued.
-Aug 29 1986 Star