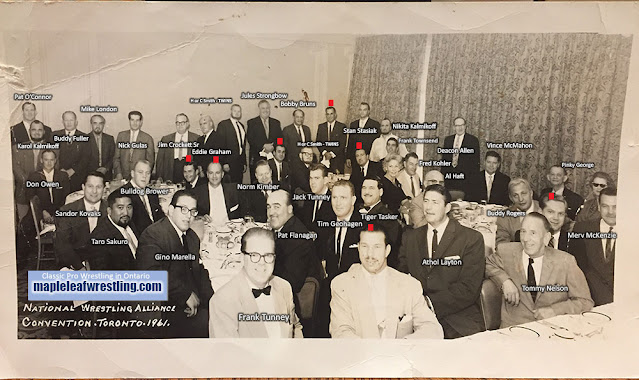 Photo from the 1961 NWA Convention held in Toronto  Click on photo to see full size
In 1961 Frank Tunney stepped down as NWA President to be replaced by Fred Kohler of Chicago. He held a card on his regular Thursday night, the first day of the convention. Stu Hart was scheduled to make what was by then a rare wrestling appearance (last at Maple Leaf Gardens in 1955) but didn't appear and never returned. You can see in the notation from the article listed further down.
*As of September 28, 1961, Stu Hart was not listed on the membership roster of the NWA. Haft, Quinn, Light, and Luttrall paid their dues right before the 1961 convention in Toronto. Hart may not have paid his dues, and was considered not an active member
Tunney participated in other meetings and conventions over the years, mostly boxing and mostly at the King Edward where much of the business went down in those days. There are a couple of mentions of Frank hosting parties during the festivities for the dignitaries in town. This was the only NWA Alliance convention held here but Frank & Whipper (and later Jack and Eddie) attended meetings held across the U.S.
Roger mentioned that he remembers some of the visiting promoters siting in the Tunney seats above the ramp taking in the card.
Tim Hornbaker's report on the convention follows...
Thanks to Roger Baker and Tim for the use of the notes
Nostalgia mapleleafwrestling.com collection
-AC 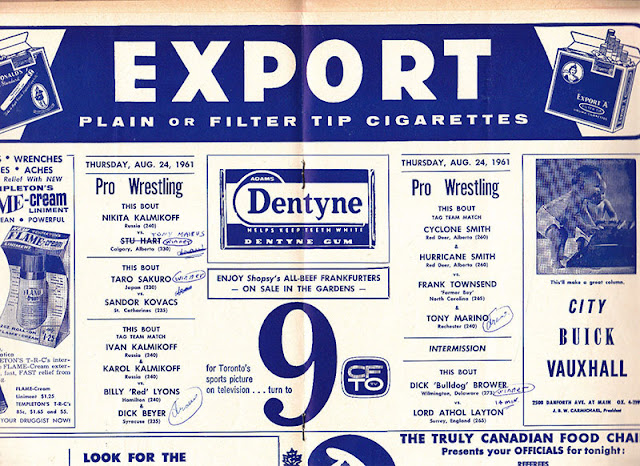 ---
From Legacy of Wrestling by Tim Hornbaker
http://www.legacyofwrestling.com/NWA1961.html

As of September 28, 1961, Stu Hart was not listed on the membership roster of the NWA.
Haft, Quinn, Light, and Luttrall paid their dues right before the 1961 convention in Toronto.
Hart may not have paid his dues, and was considered not an active member.

Cowboy Luttrall, Harry Light, Eddie Quinn, and Stu Hart did not attend the Saturday
session, but may have appeared at other meetings.

In July 1961, Muchnick claimed there were 12 members of the NWA. Following the
convention, there were 18 members in total.

The NWA Membership Committee rejected the application of Danny McShain because at
the time he didn't meet the requirements of the NWA By-Laws for membership. The
committee decided he should resubmit his application, and his check was returned to him.

The Membership Committee also wanted Jim Barnett and Johnny Doyle to resubmit
up-to-date applications. Sam Muchnick had accepted their applications without approval
from the membership committee, in violation of the NWA By-Laws. Barnett and Doyle were
prepared to take action against the NWA for refusing them into the organization, and
Muchnick had persuaded them not to do anything until they'd resubmitted their paperwork.

Although, Sam Muchnick was no longer the president of the NWA and having the same
amount of responsibilities he once had, he was still being paid $15,000 a year by the
organization. In a letter to the membership dated October 10, 1961, NWA President Fred
Kohler brought up this fact, and that the money was being paid for Muchnick to book
Buddy Rogers "as world's heavyweight champion," and Pat O'Connor "as the United
States Heavyweight Champion."

At the Toronto Convention, the NWA membership agreed that Muchnick, on behalf of the
organization, would book O'Connor as the U.S. Champion - a new designation awarded to
the former World Heavyweight Champion - to any member that wanted to use him. That
meant O'Connor had a national booking schedule, similar to that of the heavyweight
champion. Muchnick, the secretary-treasurer, was then compensated by the Alliance for
booking him. There is still some debate whether or not the U.S. championship was actually
sanctioned by the Alliance. It is a slippery slope because Muchnick was being paid by the
NWA to book O'Connor, yet there wasn't a U.S. Title committee and the title didn't need
any measure of Alliance approval to change hands - like the heavyweight, junior
heavyweight, and light heavyweight titles.

Kohler, in his letter of October 10, 1961, stated that he'd heard that Muchnick wasn't even
booking O'Connor, and it was Muchnick's assistant, Bobby Bruns. The reasoning for
$15,000 annual payment to Muchnick was questioned even more.

In addition to the Barnett-Doyle and McShain applications, one came in from Jules
Strongbow of Los Angeles on October 2, 1961. Muchnick sent copies to Kohler to initiate
the membership process.

With all the power that comes with being the NWA President, Kohler called a special
meeting of the Board of Directors to Chicago on November 12, 1961 "for the purpose of
adopting a resolution to dissolve the corporation, National Wrestling Alliance," according to
a letter from NWA attorney Harry N. Soffer to Muchnick dated November 3, 1961. If a
majority of the Board adopts the resolution, it would then be voted upon by the
membership. 75% of the membership voting in affirmative to dissolve would be needed.
Kohler informed the members that if they couldn't make the November 12th meeting, they
could vote by proxy. Soffer told Muchnick, "I know of now law whereby boards of directors
can vote by proxy." Soffer also said that it would take a three-fourth vote of "all the
members" to dissolve the membership, not three-fourths of the members voting.

Soffer also said it would be better to hold such a vote after the result of the Sonny Myers
vs. NWA retrial in Des Moines, which was being staged the week of November 13, 1961.

Regarding the talk of dissolving the NWA, Morris Sigel sent a letter to Kohler (and other
members) on November 7, 1961, telling him that "Neither as a member of the Board of the
National Wrestling Alliance nor as a member of the Alliance, can I vote for its dissolution at
this time." Sigel pointed out that such an important decision should wait until all members
could be present at a meeting to discuss it. He also noted that dissolution hadn't been
brought up at the last annual convention. "Furthermore," he wrote, "has it been fully
thought out just what will be substituted in its place if we end the Alliance?" 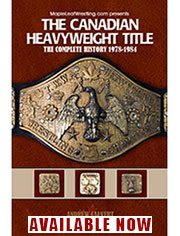