Slaughter and that US title July 1982

Continuing with '40 years ago.....'  Previously posted
Our pal Griff and his partner in crime Barry Hatchet have tracked down some great MLW photos over the years. Fan collections, pro shots, one offs...

George Wilkinson was a fan who shot some photos that appeared in Terry Justice's terrific bulletins of the late 70s early 80s. Toronto classics including Backlund vs Flair, and hometown hero Dewey Robertson challenging Harley Race for the world title.
A few of George's pics from the July 11 1982 card have been rescued and shared on the MLW Archives FB page. Always great to see some photos from shows I was at and didn't take photos. These three really caught my eye. Sgt. Slaughter, the then U.S. champ was to face Wahoo McDaniel after a non-title bout on the previous card (Wahoo had pinned Sarge).

'Their last match here was to have been a United States Title match, but the ever shrewd Slaughter pointed out that the contract called for McDaniel to defend the title against him and as Slaughter had already regained the title he was not obligated to defend the title.
Promoter Frank Tunney was powerless to have Slaughter defend on the last card, which was most unfortunate as McDaniel went on to pin Slaughter in the non-title clash.
Seeing that McDaniel was most deserving of a rematch Promoter Tunney and the National Wrestling Alliance forced Slaughter to give McDaniel a rematch right here in Toronto, but this time the title will indeed be at stake.'
Stranglehold Program July 11 1982

As you can see in the photos Slaughter is wearing the 'other' U.S. title belt.
I didn't know too much about this belt, I barely remembered it though I am sitting just a few rows from the edge of the ring and had been at the previous non-title bout (did Sarge have the belt with him?). The U.S. shaped belts were the most prominent, on a red or black strap. I learned more about this 'Southern Style' belt in Dick Bourne's excellent 'Jim Crockett Promotions United States Championship.'  This belt was in use from Mar 1982 to Mar 1983 and was also held by Wahoo and Greg Valentine. 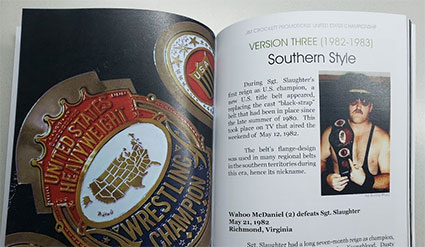 'The belt's flange design was used in many regional belts in the Southern territories during the era, hence it's nickname.'  Dick Bourne; The United States Championship, published 2015
The bout as expected was a tough battle with Slaughter coming out on top this time and retaining the title. He was worse for wear however and required some aid after the bout. Other bouts that evening included WWF Champ Bob Backlund returning to face Greg Valentine again and the two put on another great bout. The other big matchup was Jack Brisco vs Roddy Piper billed with Brisco as Mid-Atlantic champ. Piper was actually the champ - his title win in the U.S. a few days prior wasn't acknowledged here - and Brisco got the win to 'keep the title.'
Slaughter returned as US champ in Aug 82 and then the title was absent until Summer 1983. Valentine now the champ again with the newly designed 'ten pounds of silver' belt.
The Sarge had a pretty good history in Toronto. He had initially appeared here during the AWA affiliation 1977-1978 as Super Destroyer (in the AWA he was SD Mark II) managed by Lord Alfred Hayes. Slaughter cut an imposing figure as SD with the spooky Scream style mask and long black cape.

When he returned in 1981 he was now the evil boot camp Sgt. and making life miserable for the good guys. In his first bouts back he took out his wrath on area favourites including Jay Youngblood and looked like he could remain un-beaten.

A big feud with our Canadian champ Angelo Mosca follows as well as tag bouts with partner Don Kernodle against Steamboat & Youngblood. After the big tag program, Slaughter takes the Canadian title from Mosca at the Night of Champions card in July 1983 and hold it through Jan 1984 before losing it back to Mosca.

Some years later (2010) Slaughter met up with the keeper of the Canadian title belt Chris Kovachis and they snapped this great pic below. Chris is holding a cast custom replica of the NWA Tag Title, which Sarge also held. The original Canadian Title belt is over Slaughter's shoulder. Chris makes incredible cast replicas of these and other Mulko belts from the original plates. 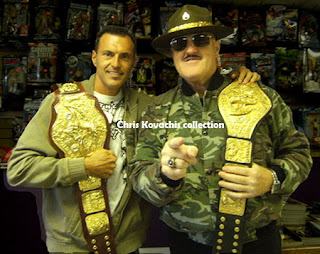 Slaughter was not done with Toronto once the NWA days ended in June 1984. He returned as a WWF star on the first card held after we became a WWF town. This time it was different, the now fan-favorite Sgt. was facing Valentine (another former Canadian champ) from the other side of the ring. He soon matches up with the Iron Sheik, yet another former Canadian title holder and then....teams with Mosca vs Iron Sheik & Nicolai Volkoff.

He appeared at Mosca's Moscamania (NWA) in Hamilton in Feb 1986 facing Danny Bullwhip Johnson and returned with the WWF in the early 1990's, again a hated heel.

You can purchase the great US Title book and others at http://www.midatlanticgateway.com/p/book-store.html 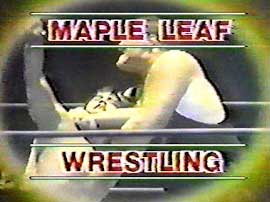