In 1965 Oshawa Promoter Pat Milosh would present his first Tournament Of Champions. It was a one night tourny with a 3 round system to determine the nights winner. Scotsman Andy Robin won three bouts to win that one defeating Professor Hiro in the finals. Milosh would present Robin with a nice trophy to mark the win. Robin (who would later become the Scottish Bearman after working with Dave and Terrible Ted here) took home a nice Canadian title belt which he may have had made to celebrate this win. 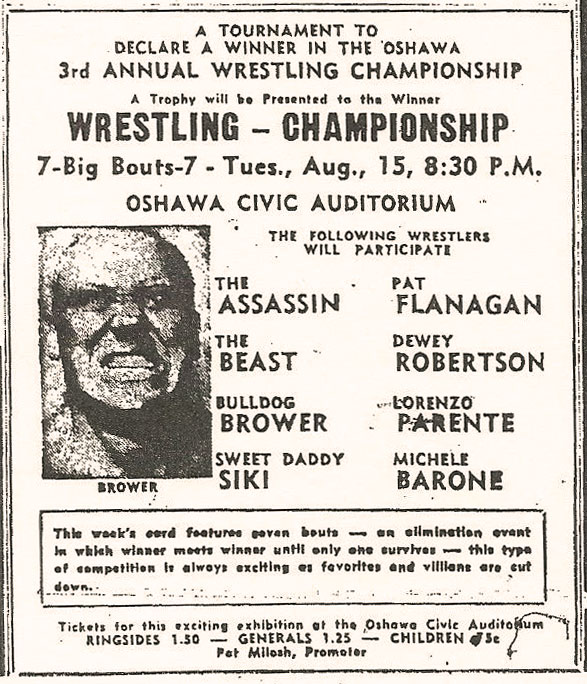 At the second one in 1966 Sweet Daddy Siki took the trophy. He beat Hans Schmidt in the final after taking out The Beast (Yachetti) and Mr X (also appeared in Toronto but never unmasked or identified). This time the hated Schmidt would attack Siki and destroy the trophy. They did that a lot in the days of trophies.

For the 3rd Annual in 1967 there was a mix of veterans and young stars. Dewey Robertson, Pat Flanagan, Siki were all entered. As was Bulldog Brower who would defeat Erwin Starr, Siki, and then have a draw with The Assassin (Guy Mitchell presumably) in the final. Ref Bunny Dunlop had counted out both wrestlers after they took the battle to the floor. A draw in a tournament? What to do? Often they would tack on a few extra minutes to decide a winner but Milosh elected to carry it over to the following week. 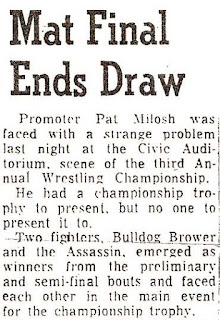 So a week later the two would go at it again in the main event, this time with no time limit. MUST BE A WINNER! shouted the ad. They would do it as a 2/3 fall affair with each taking one fall. During the 3rd fall Brower managed to rip off  Assassin's mask to reveal....a face full of tape. He had tape all around his face but for his mouth, nose, and eyes. For that action Dunlop would disqualify Brower. They should have thought of that! Bulldog would then grab the mic off the announcer and challenge Assassin to a Texas Death Match the following week. A winner must be decided. As an added bonus The Assassin would have to unmask if he lost. Note at this time Brower was a fan favorite in the area though he didn't change his style much. 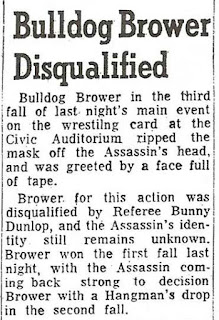 For the 3rd bout the Texas Death Match rules were in effect, our version. Winner takes all, no disqualifications and no time limit. Falls count anywhere, outside of ring fighting permitted. No holds barred except the choke. As per the ad 'The fighting will continue till one man is completely helpless and the survivor wins the bout....' 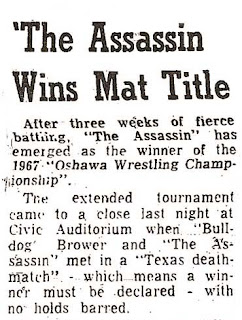 The war to end all wars would go six falls before Brower missed a top rope jump and injured himself. The Assassin would take advantage and beat on Brower's injured leg until he finally conceded. While Assassin kept his mask he would later lose it at MLG. Unmasked by the Sheik in 1971 to reveal Mitchell. That was the last tournament held in Oshawa during the Milosh days (through 1992).