It was the ship that launched a thousand careers. Well, at least several, including the man who would become Toronto's greatest name- Bill Potts aka Whipper Watson.
He wasn't the only one. The others that accompanied the soon to be re-named Whipper on that ship to the U.K. in 1936 would also make an impact on the Toronto and Ontario wrestling scenes in the coming years.
It was June 1936 and a group of wrestlers from the amateur and semi pro ranks would embark on a tour of the United Kingdom. Along with young Bill Potts, there was Ken Tasker, Al Korman, and Tom Nelson. Whipper, of course would return in 1940 and go on to a 30 year career. Tasker (aka Tiger) and Korman (aka Krusher) would continue their wrestling careers and then go on to be long time referees. Tommy Nelson's in-ring career would end sooner but he would also be a part of the office for many years to come.
Main pic: vs Billy Kohnke (mat) Sept 1938

Tommy was born in 1900 making him an elder statesman among the younger wrestlers he traveled with. He had formerly worked as a bus driver for the Danforth Bus Company. In 1928 he was involved in an accident at Midland and Danforth Rd when a CNR Train hit his bus, injuring him and the only passenger on board at the time. The bus was completely destroyed with fire after the train hit it, and ended his driving career.

There isn't notable mention of his earliest wrestling years but he likely came up in the same way that most did in those days. Learning their craft at the many clubs and related amateur contests that were plentiful in small halls and gyms around Toronto. He would hang up the boots in the early 1940's and work with Tunney in a promotional capacity through the 1960's running shows in the outlying towns around the city.

Nelson would wrestle in England as Bear-Cat Tom Nelson and Battling Tom Nelson. A Poster from Centenary Hall for a bout vs Hein Stack in Oct 1937 lists Nelson as 'from USA, extremely popular here as wrestler and referee.' A later ad in December of 1937 has him as 'from Canada and ex Olympic games, the return of an old and tried favorite, back by public demand, and glad to be back.'

There is no record of Olympic involvement or active at any games, Olympic background a frequent boast to push wrestlers in those days - though many wrestlers participated in events qualifying for them.

Other names alongside Nelson in those years Ben(gal) Engbloom, the popular in Toronto amateur Finn, as well as Herb Parks. Parks was said to be a fine wrestler in his day and he and his brother Bill (Dinty) were early stars for Larry Kasaboski's Ontario based Northland group. The Parks brothers later owned Sunset Park in North Bay until Herb disappeared on a hunting trip in 1956 and was later found drowned. Sunset Park was the inspiration for the naming of the Sunset Flip.

Nelson made it through other parts of Europe through 1939. On a physicians statement in Toronto on Feb 20 1940 it lists his past bouts and includes stops in Belfast (where he won a title bout), Edinburgh, Vienna, Budapest, Paris, London, Manchester, and finally home to Toronto.
The Belfast title bout in March 1939 was vs Mike de Mitre for the Light Heavyweight Championship of Europe. Nelson wins and the local media plays it up with Tommy listed as a local wrestler. They don't mention it again though but the win stands. He goes on to more dates through Europe where they played up the title win or added it to his credentials (see Physicians report below) 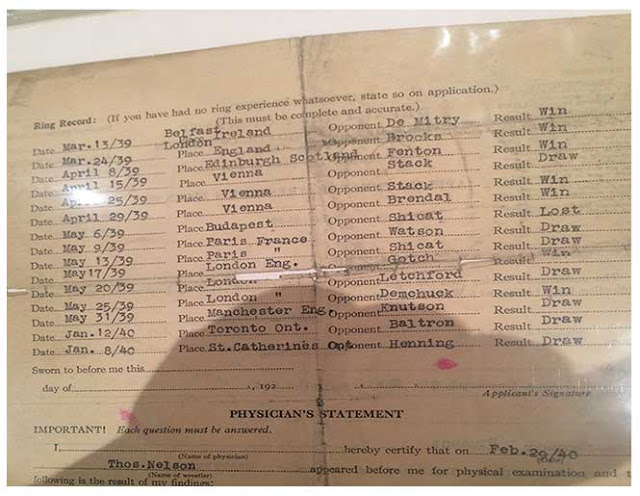 His debut at MLG came on Jan 12 1940 vs Pete Baltran. The write up lists Nelson as hailing from Ireland and having had won the European light-heavyweight championship back in 1939. In his recap of the bouts Joe Perlove called Nelson an 'undersized grappler from Ireland' in his draw with Baltran.

It's not clear when Nelson joined the office in an official capacity but appears to have been involved as one of Tunney's insiders by the late 1940's. Nelson worked as an associate promoter in the same way that Sammy Sobol and others had through the years. Running the outside towns and reporting (bringing the $$$) back to the Toronto office.

He publicly ran Stoufville, Aurora, Barrie, Collingwood, Sutton, and Bradford. And for a time in bigger centers such as Galt (Cambridge) and Kitchener until Johnny Powers bought Tunney (and Nelson?) out around 1965.

In 1955 Nelson was announced as taking over for Roy McMahon as matchmaker for CCWA (Red Garner's group) in Aurora on Aug 29 and then promoting in Stoufville, this time with Tunney stars instead of Garner's team. Garner and Tunney had a small turf war in the area (that's for another story) and listing Nelson as part of Red's group was likely a ploy to keep Red's fans.

The only mention of a Toronto-proper show under Nelson was a 1958 show held at Scarboro Arena  on Oct 4 to benefit the Scarboro Hospital Building Fund using Tunney's stars. There is a small mention later of Nelson being on the Board of the Scarboro Police Youth Club.

In some towns Nelson was referred to as Matchmaker for the Queensbury Club, the Toronto office's official name. 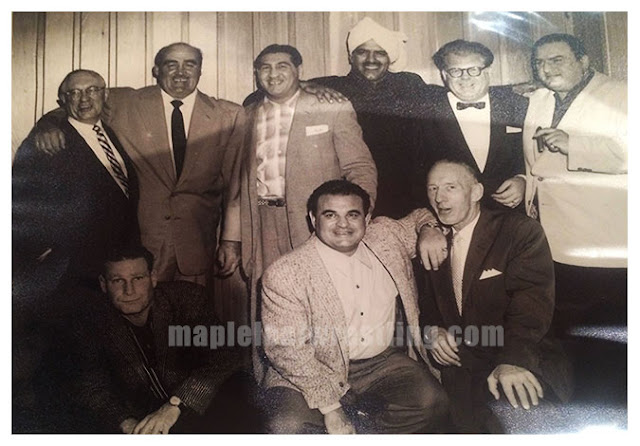 From a 1958 piece on Nelson in the Galt Evening Reporter  ' I was wrestling on a pro card in Manchester, England in 1938. I was thrown out of the ring and cracked my spine on the exposed iron part of a ringside theater-type seat.'
The result was five painful months in an English hospital with the not-too-heartening news that he would never walk again. But just two years later Nelson was not only walking but was back on the pro grapple beat. It was 1940 now and he was booked into Detroit. Gus Sonnenberg was his opponent and when big Gus attempted a flying tackle both gladiators went sprawling among the ringsiders. Nelson, on the bottom, found another empty iron frame with his tender spine. Another long siege in hospital followed. But this time it was the end. There definitely would be no further wrestling.

After a series of spinal operations they found that he shrank somewhat from the effects of the spinal knife job. In a later 1962 piece in the Barrie Examiner, it repeats the story and says his height was pared by a couple of inches as well as his weight. It says he fought at 220lbs (don't think so but he was now down to 150lbs) and from later photos looks to have stayed in good shape into his senior years.

Roger Baker attended some of Nelson's shows in the early 1960's.


'Tommy Nelson was a very nice guy who was worried for his incoming wrestlers on a particularly snowy evening in Kitchener but still kept his smile amid the pressure of the evening...At another show in Sutton one of the wrestlers threw his opponent via a slingshot into one of the corner posts with such force that the ring ropes popped out of the turnbuckles. Tommy came to the ring dressed in a suit, and again under pressure got those ropes back up, and the balance of the card was able to go ahead. A part time wrestling promoter must be able to handle a litany of potential problems!' -Roger

Thanks to Roger Baker, Brian L, & Nicholas Campbell
If you can add anything to Mr Nelson's story please contact me