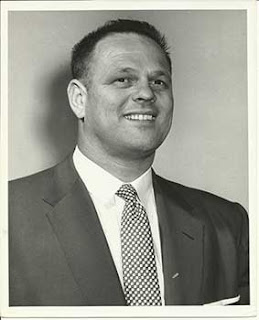 Dick Hutton is an interesting and largely forgotten part of the Toronto wrestling history.

He arrived in April 1956 just after Whipper had won the World Title and business was booming. From the start he was unbeatable, usually ending the bouts with the Abdominal Stretch or Atomic Drop. His first two bouts here he beat Donn Lewin then brother Mark on the next card. He also ran his $1000 challenge if anyone could beat him in under 20 minutes. In the papers he was pictured with a $1000 bill on his chest or sometimes a handful of bills. To kick off his challenge he beat two wrestlers in a row and the fans were impressed.

Tunney started to throw bigger names at him, a couple vs Pat O'Connor  and a few World Title bouts vs Whipper. Hutton loses to Whip but not in under 20 min so keeps his $$$.

In early 1957 he came to the ring to aid Gene Kiniski during a battle with Whipper and found himself a like minded tag partner. They started accompanying each other to the ring as 'seconds' and interfering on each others behalf.

Another bout at the East York Arena (used when MLG was unavailable) saw a full house of 2,500 with 1,000 turned away to see Hutton face Watson again. This time Whipper gets the win in under 20 minutes but Kiniski jumps in and tears up the cheque as it is being presented. What happened to the cash! Hutton & Kiniski proceed to take out their anger on ref Bunny Dunlop which spurs on the packed house to a full out riot.

A week later at MLG Hutton & Kiniski brawl to a curfew draw with Whipper & Yukon Eric. It's also announced that Kiniski was fined and suspended for four weeks in Ontario by the Athletic Commission for his role in the East York riot. Hutton escaped any punishment. That episode led in to the provincial government here looking into Pro Wrestling. Interesting times, we covered that story for a piece on Slam Wrestling some years back.

Hutton also teamed with Hard Boiled Haggerty in a team the fans loved to hate and vied for the Canadian Open Tag Titles. He continued to have Kiniski around as a second while Whipper had O'Connor to cover his corner. That feud tore up the Southern Ontario circuit for months.

In late 1957 they started pushing Hutton. He took on both Tiger Tasker & Al Krusher Korman (both local wrestlers turned refs) under tag rules, one at a time and looked strong winning with the Abdominal Stretch. On the next card he faced tough Fred Atkins & Jan Gotch (Hamilton guy) forcing Gotch to loudly submit to the stretch. They then lined him up against the Kalmikoff's. Both of them. Lucky for them -or maybe Hutton- they no-showed. Hutton flattened sub Korman and kept the money.

In Nov 1957 Hutton beats Thesz at MLG to capture the World Title. Hutton had put up twice the usual money $2,000 and kept the cash & the title. But no belt. Dick Bourne looked at Hutton 'the champ without a belt' in his great Crown Jewel book. The papers said Hutton had been a last minute replacement for Whipper who was injured but it wasn't the case. Maybe making it seem like a fluke win after a sub.

He returns with the title to defend 9 times including four against Whipper. In one bout it appeared Whip had regained the title when he pinned Hutton. The ref ruled that Hutton's foot was on the ropes and it re-started. Whipper was incensed (he was pretty nasty at times) and threw Hutton hard over the ropes to the floor. Hutton was stretchered out. Not a good look for a champ.

In an early 1958 defense vs Watson there were 2 special refs assigned. The popular Kangaroos Costello & Heffernan were set to handle the duties. Even the papers thought it was a strange idea, a tag team reffing a World Title bout. They drew at the 11pm curfew with Hutton using heel tactics throughout. Star sports guy Jim Proudfoot wasn't impressed. 'It’s the first time in recorded history that a National Wrestling Alliance titleholder has gone through a whole bout without wrestling.'

Former World champ Bill Longson also earned a shot at Hutton by beating Lord Layton. He too fell to the stretch in a 15 minute bout in Longson's last World Title challenge here. That one drew only 4,500 fans to MLG, one of the lowest houses in years. A bout vs Thesz (usually a great draw) only brought in 6,000. They went again with Wilbur Snyder as ref and didn't do much better.

In the recap for a Nov 1958 defense vs Hombre Montana (Whipper vs Fritz VE was the main) Steve York in the Globe wrote 'Dear Santa: Please ask Sam Muchnick, National Wrestling Alliance president, to make Lou Thesz champion again.'  When Pat O'Connor took the title and returned here as champ York wrote 'Yes, Virginia, there is a Santa Claus. How else can you account for O’Connor replacing Dick Hutton as NWA champion?  O’Connor bounces around, has more color and is more expressive than the phlegmatic, stolid Hutton, who does everything deliberately.  Besides which Pat is as good a wrestler as Hutton.'

Hutton faced champ O'Connor in his last challenge here losing by count out. He and Kiniski continued to rack up the fines for their various misdeeds and later Hutton faced Whipper in a bout to decide the number one challenger. They drew. Hutton also put up his money against the other unbeatable type Don Leo Jonathon and lost, but after 20 minutes. He kept the cash but Don Leo was given the title shot vs O'Connor.

As Challenger to World Title (Toronto only, there were title defenses on the circuit too)

As World Champion (Toronto only, there were title defenses on the circuit too)