Books for the Toronto Wrestling fan

Some gift ideas for the Toronto (or other!) wrestling fan in your life.

Ron Hutchison's Pain Torture Agony is a great tale of a life in wrestling. From rabid Toronto fan turned wrestler to trainer of the stars....

If you are in Canada try Ron directly as he has some copies that can ship domestically. Ron is on Twitter at @RonHutchison1

We looked at it here Ron Hutchison: Pain Torture Agony!

Available at https://www.amazon.ca/ and other Amazon locations

We looked at it here Stampede Wrestling; The History of the ...

Any of Dick Bourne's books as there is lots of crossover with our scene here. Filled with history, great photos, and the most creative look of any books.

We looked at Dick's latest, the great Crown Jewel here Crown Jewel and the love of Wrestling

Nicholas Campbell's Falls, Brawls and Town Halls: The History of Professional Wrestling in Northern Ireland covers the Emerald Isle admirably, and there are many Canadian connections.

Available at https://www.amazon.ca/ and other Amazon locations

We looked at it here Falls, Brawls and Town Halls: The History of Pro...

We also have a couple of books available in the .com Bookshelf

The Canadian Heavyweight Title The Complete History 1978-1984 covers the champs, the changes, and other tidbits of the Toronto scene during the Mid-Atlantic era

From Nanjo to The Sheik: Tales from Toronto Wrestling looks at the boom of wrestling in Toronto with a focus on the classic eras.
Quick Bits: The Best (and rest) of Toronto Wrestling is a deep dive into the history from the 1920s-1980s in 'Quick Bits.' 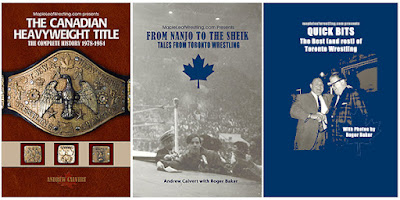