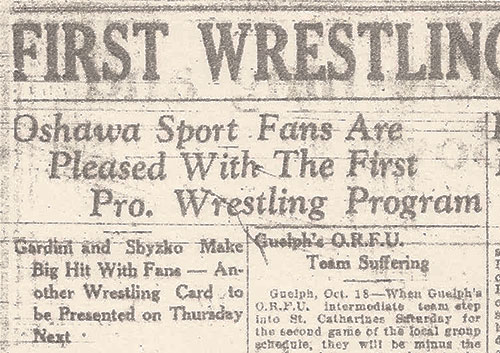 The firs pro card in Oshawa takes place about five months after the first weekly card in Toronto. Promoter Ivan Mickailoff was expanding from his home base at the Arena Gardens in Toronto to include Hamilton, Niagara Falls, Brantford, and Oshawa. This report which may have been written by Mickailoff or an aide appeared in the Oshawa Daily Times Oct 17 1929.

Tonight sees the ushering into Oshawa of professional wrestling. It remains to be seen just how it will be received by the people of Oshawa. Present indications point to a good attendance.

These wrestling matches are being sponsored by the 34th Regiment. The Regiment is to be congratulated on their foresight in bringing to Oshawa, what has proved to be a very popular sport, in Toronto and Hamilton. Even the Toronto newspapers were a little dubious about its reception in Toronto but now the Arena is being filled whenever a wrestling show is put on.

The persons in charge of the show have spared no efforts to make the card a success. Adequate seating accommodation has been provided and the price of admission set is not prohibitive to a record attendance. The wrestlers procured for the evening assure three first class battles. The preliminary, which is to last from thirty to forty minutes, is between Ned McCarr, the wild Irishman, and Cowboy Rogers, the World's champion dogger. The semi-final is to be a thirty-forty minute scrap between Renato Gardini, champion of Italy and Charles Manogan. The tid-bit of the evening is the last match. Stanislaus Sbyszko, former world champion, meets Archie Jeanuette, the French Ace. This promises to be a real scrap and the fans will be right out of their seats all the time. For the final match the winner will be decided by the best two falls out of three. The fun commences at eight thirty. What ever you do don't be late. In wrestling as in every other sport, the time when you are away is likely to be just the time when the best part of the performance is pulled off. To avoid this be on time.

These matches are worthy of your support and they are worth your money. That is why the Toronto and Hamilton crowds are growing larger each night. Come out and see some current wrestlers in real action.

The night was a big success for the 300 fans who tried out that first card. Good enough that they set up a card for the following week. Pro wrestling was here to stay in the city.