mapleleafwrestling.com presents- with design and layout by Dick Bourne
The Canadian Heavyweight Title The Complete History 1978-1984 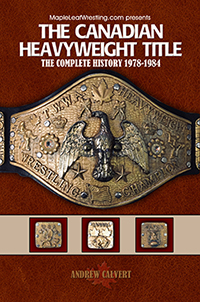 'A remarkable, compelling, and long-overdue tale about a championship belt that shared the stage with some of the most respected titles in professional wrestling history.'
Marshall Ward for Slam Wrestling

Writeup at midatlanticgateway.com
Review at Slam Wrestling
Thank you both!

In 1978 as the Toronto territory was taking off with the young stars of Mid-Atlantic wrestling, promoter Frank Tunney introduced a local championship. That title, the first true local title in many years, was named the Canadian Heavyweight Title to be defended by the top star in Maple Leaf Wrestling.

During those years the area was one of the most exciting and important territories in the wrestling world. Join us as we revisit the big cards, the tournaments, the beautiful title belt, and many other memorable slices of Maple Leaf Wrestling 1978-1984.
Posted by AC @ Maple Leaf Wrestling
Email ThisBlogThis!Share to TwitterShare to FacebookShare to Pinterest
Labels: Canadian Heavyweight Title
Newer Post Older Post Home